…my week in pictures. 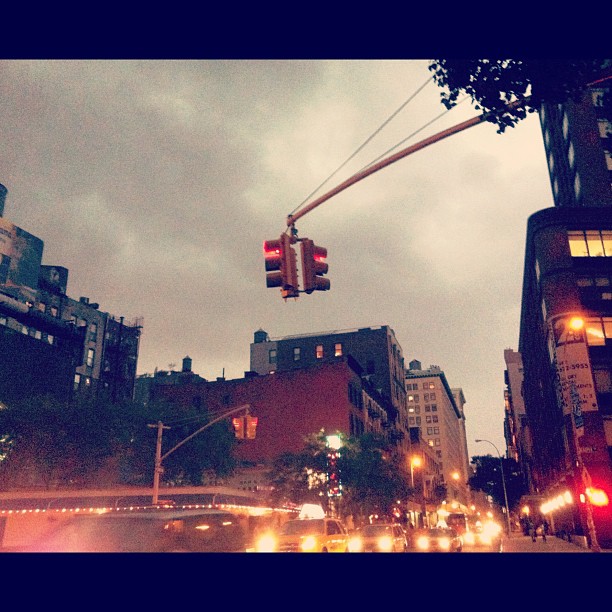 lauren and i decided to get together on thursday night for shopping and some after work drinks. we also decided to do this right before a huge storm brewing over NYC…  this was just moments before shit hit the fan and we ducked into the bowery electric for cover.

i finally bought this book, and found this spidey journal in B&N.  i don’t know why i bother to collect such nonsense, i always blame it on “maybe someday i’ll have cool kids that’ll appreciate this” (the spidey book).  anyways, this book is pretty interesting so far.  if the hasidic jews really think half of the shit that she says, that’s pretty sad.

although i shouldn’t really judge another persons religion, i guess it’s just hard for me to understand their reasoning. either way, it’s been an interesting read, so far.

so everyone and their mother has been putting these LUSH bath bomb things up on instagram, so i went to go check out what they were.  it was my boyfriend’s sister’s birthday, so i figured maybe they had nice gift sets or something.  i just ended up getting her a few bombs and some foot scrub (and some blackberry bath bombs for myself – my favorite so far).

i went back this week because it’s right by my job (and wanted my bathroom to keep smelling as delicious as it did when i had the initial bombs).  i already forgot the name of the yellow bomb, but some chick that worked there told me to use that and some bath melt (which i also can’t remember the name of, but it’s hot pink with a blue flower in it) at the same time. when i put them together, it smelled like pixie stix. YUM!  the pink bomb is called “twilight” and appropriately has glitter inside of it, lol.  it’s kind of annoying to clean up, but it smelled great, i’d totally buy that one again. she says they fly off the shelves there, so to keep my eyes peeled.

i have this dark purple manic panic hair dye that i’d never used before (which happens to be that dark purple that katy perry has been recently using), so i figured if i were to put it over my blue, it’d be a different hue instead of the muted/dark purple… guess i was right.

it actually looks purple in real life, i guess my iphone camera doesn’t pick it up.  either way, my co-worker derek suggested that it looks like the ocean and that i should find a little surfboarder dude clip to put on my bangs.  i think that would be super cute, lol.

so after ages of never using them, rite-aid by my house had sally hansen nail strips 50% off, so i grabbed a few.  after i saw the no doubt video for settle down (she was wearing checkerboard nails), i wanted to do them.  not sure if she had b/w or yellow/b – these yellow/b are from the avril lavigne line.

they’re super cute, but they were kind of a pain to get on. i don’t know if it was because i was using them for the first time, or what. my friend suggested that i make sure to hold them in my hands to warm them a little bit, as it helps with the application.  when i was putting them on, it says to fold them over your nail and buff them down with the little file that they include…  it was a little bit of a bitch because they weren’t warm and were a bit stiff.

after being irritated after applying only two of them, i decided to paint the rest of my nails, lol.  i wasn’t really in a nail-creative mood this week.  i’ll probably give them another shot and use the tip my friend gave me.  also: if you haven’t used them yet, when you open the package, they start drying out.  my other friend told me to cut them in half, and she was totally right.

if you can find these, GRAB THEM. sooooooooooo delicious!

case in point: let’s move it along, people.

sheena (of chainsawsandjelly.com) and i both work in midtown, so i wanted to see her last week. i mean, i want to see her all the time! but this week, i had something for her.

last weekend, i was cleaning out my apartment and found three sets of garbage pail kids cards from 1986. one was named “bruised lee” with a little karate kid chopping away at a block, and sheena loves bruce lee. how appropriate! i also had a pair of #jaejess earrings for her 🙂

it was really good to see her, catch up… we got some starbucks and sat/chatted outside for a couple of hours. a photographer stopped and asked if he could take pictures of us, and our arm tattoos… just a great meeting of the minds<3

i’ve been trying to organize all of my supplies for my earrings between a plastic chest of drawers and this thing… colour coordinated of course, lol.

i’ve decided i need some “grown up” beads… too many raveresque beads in there.

i reworked a pair of pentagram earrings that i had made a few months back… thought it looked “cleaner” with the center also wrapped with the chinese staircase.

oscar being a total mush/ham the other night…<3

i found these for me and jes the other day @ claire’s. i had started a mini-collection of these tins a couple of years ago from when i worked down in DUMBO.  there is a candy store down there that had a few different ones, so i started buying them. they’re all super cute, but i loveeeeeeeeee the halloween themed ones.

i got myself a new pair of TOMS, since i really hadn’t purchased a pair for myself since sometime last year…

when lauren and i went out for shopping/drinks the other night, we ended up at cafeteria for late night munchies. i had the summer peach punch to drink (DEEEEEEEEEEELISH!), and then the usual mac & cheese spring rolls with a side of meatballs for my snacks. never a disappointment there.

…while lauren and i were munching away at cafeteria, she dropped a no doubt bomb on me, lol. i had no idea, but they were playing live (for free!) at central park friday morning for good morning america. i figured i’d tag along with her/her work buddies but she cancelled on me at the last second. i ended up going by myself, but then i met up with my ex-boyfriend steve’s little sister.

she was with one of her friends, and we were on a mission for a starbucks, when we decided to try to go to the empire state building. we were talking about all of the stuff us new yorker’s take for granted living here (the touristy stuff), and figured since we were relatively close, we’d try to do that. also: we were up so early and seemed to have all the time in the world, lol. when we got there, some lady selling tickets said that it’d be an hour wait just to get inside of the building, and $25 to get up to the 86th floor. i’m guessing that’s the observatory floor? either way, over an hour? pffft. so we bailed.

BUT yeah, no doubt played and that was pretty cool. i thought i’d never seen them before, so i made it a priority to go to this thing… then i realized that i saw them when they toured with U2 back in 2002 or 2003. they had only played 4 or 5 songs the other day, all good. it wasn’t such a HUGE turnout, but it was packed as much as it could be at 7am, i suppose.

i got on this whole dress kick at the beginning of the summer, this was one of them. it’s from target if anyone’s interested… i instantly fell in love with the colours.

i really don’t know what this was exactly, but i found it on the M train at 7 in the morning. i’m guessing on a fresh train… WTF? yuck.

i FINALLY booked a trip back to SLC – i’ll be going from 09/26-10/02. soooooooooo excited! bee is moving to LA with her boyfriend, and i’m not sure when or if she’ll be going back to SLC, so it was a must.

i found a bunch of new SLC friends via instagram this year, so i may even get to hang out with new folks. i know a sweet couple, the boyfriend works with drew… so not a totally stranger/creeper… lol.

posted in: books, food, girly shit, music, my daily commute, my day, my morning, my night, my steeze, my week in pictures, my weekend, nails did!, online shopping, productive, shows